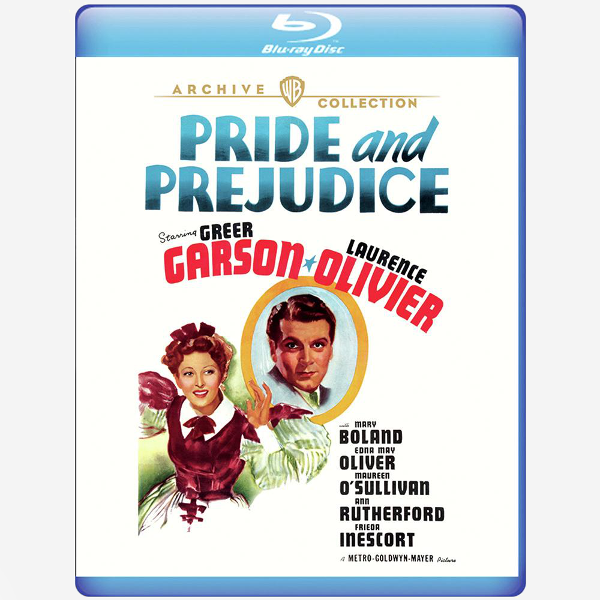 The Warner Archive Collection listed its July and August offerings this week, and I saw three that caught my attention.   ← 1940’s Greer Garson-Laurence Olivier version of Pride and Prejudice holds up extremely well; it’s one of the better literary adaptations/condensations I’ve seen.

Also in July is Busby Berkeley’s Million Dollar Mermaid, the most spectacular and physically demanding of MGM’s Esther Williams pictures. The Technicolor ought to look good too.

And then in August comes the Katharine Hepburn/Spencer Tracy sports-oriented George Cukor comedy Pat and Mike. The comedy centering on Hepburn’s lady athlete was once considered a takeoff on gender roles and the way women are underestimated; now I’m wondering if it will pass muster with current feminist thinking. Oh, it’s funny at times, and it has an early appearance by Charles Bronson, too.

The only surprising thing is why this choice and Woman of the Year should arrive on Blu-ray before Adam’s Rib, the duo’s only slightly sexist masterpiece, also directed by Cukor. The WAC has also announced the Hepburn/Spencer film Without Love for a little further down the line. 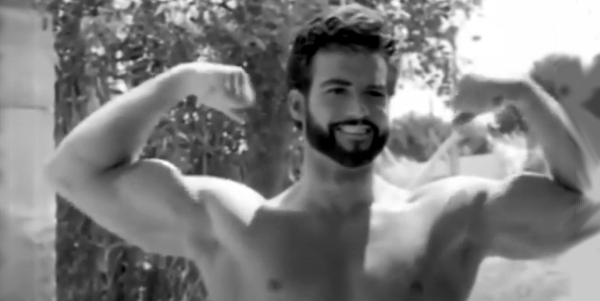 Steve Reeves fans will applaud these three or so minutes of publicity shots of Steve Reeves in Italy. I don’t know who put them online, but I caught it through a helpful Facebook post by Tim Lucas. He arrives and departs by plane, and performs on the set of what looks like one of the original Hercules movies, and perhaps another sword ‘n’ sandal epic. He apparently showed up for work with his Hercules beard already grown.

Naturally, every pub flack has the famous bodybuilder pick up heavy objects — the nearest bellissima attrice italiana, mostly. He obliges every request. They even have him drag a large airport stairway  a few feet before he boards his plane, beard shaved. Reeves looks like a friendly and agreeable guy — even though he’s always posing there’s not a hint of narcissism. The publicity clip puts the Enzo Masetti music score in the background. I can’t identify the numerous leading ladies on view. But we certainly recognize the great Gordon Mitchell arriving at the airport as well — what a terrific chiseled face!  Offhand I don’t see any movies in which the two actors co-starred. 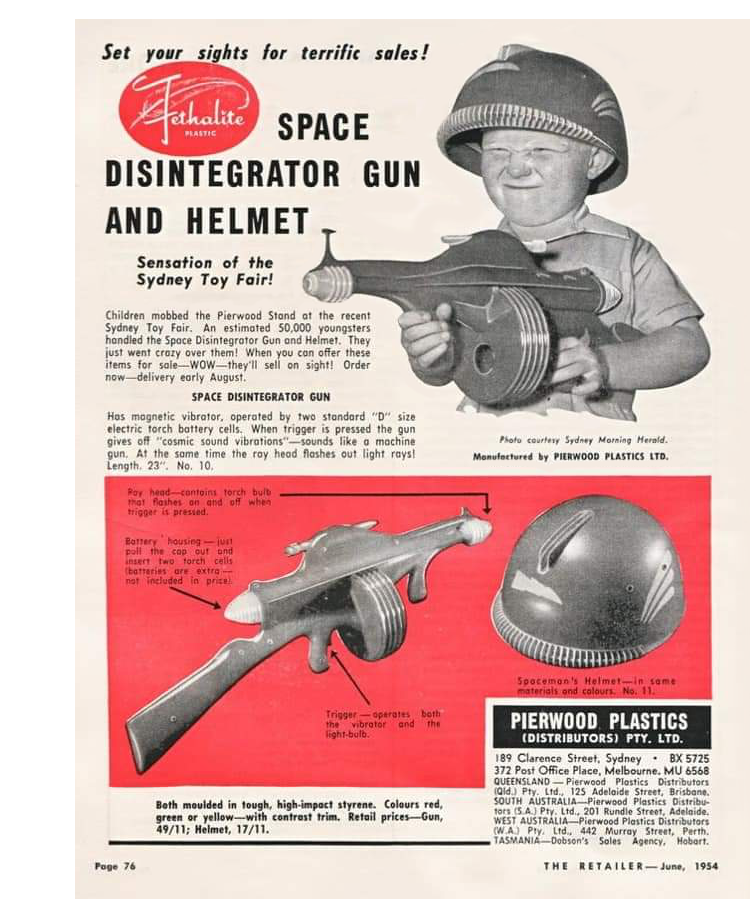 And this final item should be self-explanatory for anybody who was a little boy in the 1950s. I swiped it without so much as a how-do-you-do from the astute observer of arcane culture, amiable colleague, and fellow family man Richard Harland Smith. I guess it’s from a 1954 Australian trade magazine called Retailer and it appears to be 100% genuine. Who is this kid, Aldo Ray Junior?   He works up an impressive Sgt. Rock grimace there. It’s a dirty job disintegrating alien slimeballs, but Little Aldo’s got what it takes.

The graphic becomes bigger and fully readable when opened in a new window.

To fully understand the vibe, you had to have been a 1958 tyke, exposed to twelve weekly hours of gun-and-gundown western fare on TV. I remember a Kellogg’s cereal box that explained how to save up coupons to send away for one of nine different machine gun toys that were pictured. I couldn’t make up my mind.

This ad is actually from a couple of years before my time, in the Space Patrol days when spaceman toys were apparently really popular. I don’t know if the ray gun – helmet combo worn by the little boy in It Came from Outer Space was a commercial item or not. But it’s important for CineSavant to attest to the truth: if I were reading that ad at seven years old, I’d be thinking,

“I can look tougher than him, and I can squint better too. After the outer space monsters are toast, I know a few playground bullies that need to meet ‘my little friend here,’ heh heh heh.”

Look at it this way — it lights up and makes a noise, but it won’t put my eye out.  Thanks for reading — Glenn Erickson