The beginning of what I hope will be more of the same… good friend Bill Shaffer contributed an article to yesterday’s Greenbriar Picture Shows called From the Annals of Grassroots Showmanship.

Bill is graced with the perfect credentials to harmonize with Greenbriar’s John McElwee: John is the undisputed authority on American Film Exhibition history, and Bill is from a family that was big in theaters during the grand days of moviegoing.

Best of all, Bill has kept documentation and photos and clippings from the era. This first photo-feature article talks about his father’s promotions for Alfred Hitchcock’s 1956 The Man Who Knew Too Much, with a sidebar look-in at the teen delinquency delights Dragstrip Girl and Rock All Night. Every time Bill showed me a ‘family theater heritage’ photo it was a real treat — they made their theaters look like the most inviting neighborhood movie palace in the country. I’ll be keeping an eye out for more of these articles, and encouraging Bill to maybe turn it all into a book.

Recognize the above setting?  Note the interesting specimen of a Martian insect creature mounted prominently on the lab table.  It’s a set still production reference photo from the original 1958 BBC serial of Quatermass and the Pit, a classic of vintage English TV that’s the equal of the 1967 Hammer film version. A featured page at the BBC Archive coyly entitled The Joy of Sets has collected an unusual, rather brilliant array of free giveaway images: large jpegs of empty sets from famed BBC productions.

Why?  Since so many of our personal social lives have been reduced to remote videoconferencing, people are reaching for interesting background art to key in behind themselves during calls or Zoom meetings. For instance, a teacher I know took a picture of her (now abandoned) classroom, and uses it when teaching online, just to create an appropriate visual context. 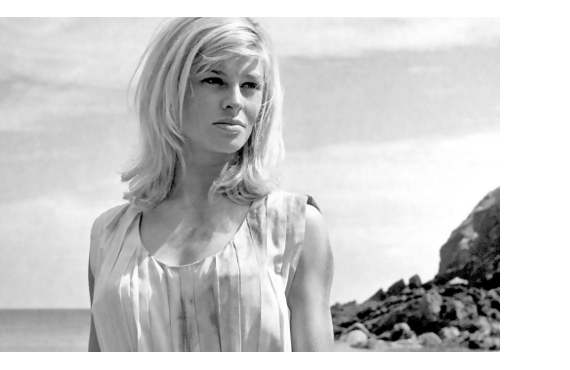 So just for fun, the BBC has uploaded an entire gallery of archival reference stills of the empty sets from BBC productions, old and new. Large set stills are offered for children’s shows, variety shows, sitcoms, even a ‘Top of the Pops’ music show with drums set up for The Hollies. The science fiction section offers empty background images from Blake’s Seven, Dr. Who, and a cerebral sci-fi show from 1961 called A For Andromeda that I believe introduced Julie Christie. ( ← ) She plays a woman cloned in a biology lab by a computer program sent from another galaxy.

All this forces me to again reveal my age: I’ve never forgotten an ancient Mad Magazine feature satirizing video phone calls. In the late ’50s or early ’60s when this cartoon feature was published, video calls and teleconferencing didn’t exist, and weren’t expected in the near future.

The joke in Mad’s article examines EXACTLY what is happening now… it fantasizes a roll-up photo screen backgrounds to hide one’s real surroundings while making a video call. If your house is messy, a background screen can substitute an image of a sleek modern apartment. I recall that another comic panel showed a man using another screen to hide from his wife the fact that he was hosting a wild party. Anyone out there have access to that old Mad issue?  A month or so back I slightly mis-remembered another Mad article about 3-D cameras. Be assured that an obnoxious scold correction or two came in on that one almost immediately.