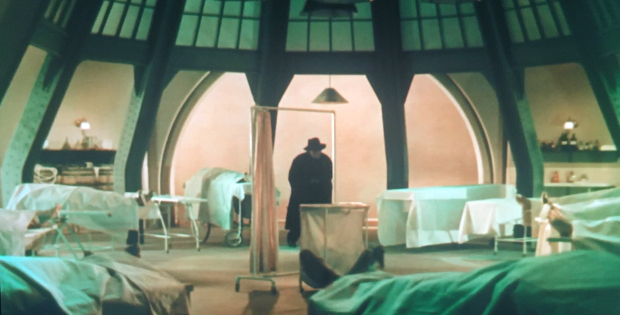 A fun day for CineSavant — Mystery of the Wax Museum arrived right on time to motivate an extra, very much anticipated review. Don’t worry, it’s not like CineSavant central gets an early look at that many high-profile disc releases. The impressive restoration is a huge improvement on the pale ‘approximate’ colors of the much older DVD transfer. Even Jack Theakston wrote (on FB) that it couldn’t be better.

Right … here’s a link or two or three:

“A show with imagination to burn, yet that by
modern standards could be shot in someone’s basement.”

Helpful correspondent Eric Wilson all but does my work for me. It’s a personal note but I’m guessing he doesn’t mind sharing it:

“Hi Glenn, Here’s another group of videos to add to your shelter-in-place playlist. With the cooperation of Burr Tillstrom’s heirs, beginning in February the YouTube account originally set up to promote the Kukla, Fran & Ollie DVDs began posting a complete episode every night. The goal is to put the entire Kukla, Fran and Ollie archive online, all 700+ episodes free to view with no paywall getting in the way. Most of the episodes so far have an appealing low-stakes feel. It seems appropriate that a show with imagination to burn, that by modern standards could be shot in someone’s basement, is resurfacing again at a moment when conditions have shrunk mass media back to an almost personal size.

My first instinct was to drop a bunch of links on you, because the are already 35 hours of Kukla, Fran & Ollie to sift through. Since you were talking about the Eisenhower videotape a few weeks ago I’d like to draw your attention to the one that’s titled First Kukla, Fran & Ollie Color Broadcast (October 10, 1949). The Kuklapolitans took their show to the FCC in Washington, D.C. to take part in the first publicly-announced demonstration of RCA’s compatible color television system. The episode went out to the rest of the country in colorful black-and-white, of course (which is the only version that survives). 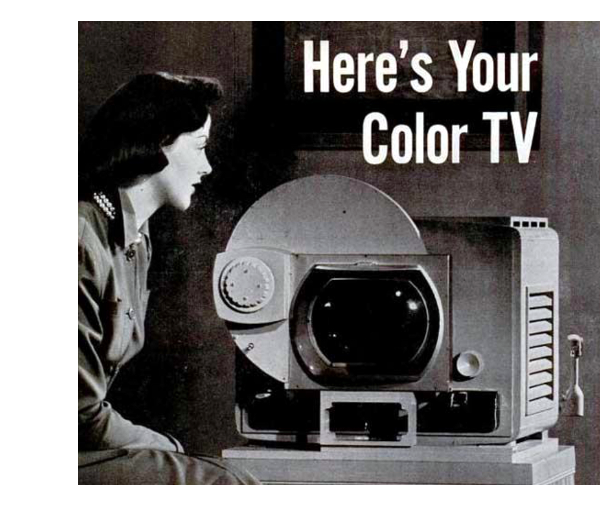 RCA’s 1949 color TV system was an un-perfected early draft. Their demonstration was enough of a disaster that the FCC approved a competing system, CBS’s mechanical-electronic hybrid ( → ). It worked as advertised but was incompatible with existing sets, and would have rendered them useless. One of the reasons for turning down RCA’s system cited in the FCC’s report was ‘mis-registration of colors.’ Even without color we can see that the back of Kukla’s (bright red) tunic displays an offset white fringe. The only thing that prevented a transition to CBS’s incompatible system was RCA taking their case to court. 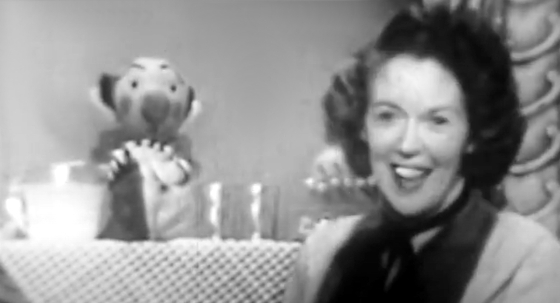 Only maybe a half dozen RCA color cameras existed at the time, so the color episode uses only one camera. That’s why we see no cutaways to a second setup for ads or credits. Fran Allison and the Kuklapolitans of course had charm to burn, and in the time-honored Chicago improv tradition did the best with what they were given. It’s fascinating to watch, and of course we’re lucky to have it at all. As for how the color test episode stands up as television, it’s not necessarily the best of the series. My vote for a favorite would be Lemonade (August 17, 1949). — Stay well, Eric Wilson”

Thank you Eric. To me that CBS television monstrosity looks like something a Republic serial villain would use to contact Planet Edsel. But I certainly understand the political lobbying catfight that a standards decision would entail. A close friend took part in Standards Negotiations (he called it ‘standards wars’) to adopt an HD format. His opinion is that for the adoption of every new standard in video and TV, corporate powers-that-be saw to it that the best option was consistently rejected in favor of systems that enriched dominant companies. In my own post-production experience I’ve met many video engineers that couldn’t believe how unnecessarily dumb and clumsy was our old NTSC system: Never The Same Color.

And, just under the wire, in comes an exciting list of Kino Lorber discs scheduled for June. There are some hotly desired pictures announced. Ignored when new, James Clavell’s The Last Valley is a 65mm Todd A-O epic that holds up extremely well, even on the weak DVD I have in a box somewhere. It looked great on a big screen, with Michael Caine, Omar Sharif and Florinda Bolkan. Karel Reisz’s Isadora has been out of reach forever, at least in L.A.; I remember the late Bill Warren was upset because he thought it had been lost. The role of dance artist Isadora Duncan was a big part for Vanessa Redgrave. I’m curious to see it — the disc comes with a commentary with Allan Arkush and Daniel Kremer.

I should be reviewing the first two volumes of Kino’s Film Noir: The Dark Side of Cinema soon enough, but the upcoming Film Noir: The Dark Side of Cinema III offers a couple of promising titles I’ve never seen, Abandoned and The Sleeping City, along with The Lady Gambles. A second Karel Reisz offering is his mod-era eccentric comedy Morgan – A Suitable Case for Treatment. It also stars Vanessa Redgrave, and I think it launched the film career of David Warner.

Additional July titles include the 1971 Mary, Queen of Scots, the epic Caravans, Bob Clark’s Murder by Decree, Paul Bartel’s Not for Publication and Scenes from the Class Struggle in Beverly Hills, William Castle’s Let’s Kill Uncle, Western and Deanna Durbin collections, plus others. And of course, we have our 3-D glasses out and polished up, waiting for Kino’s 3-D Taza, Son of Cochise later this month.