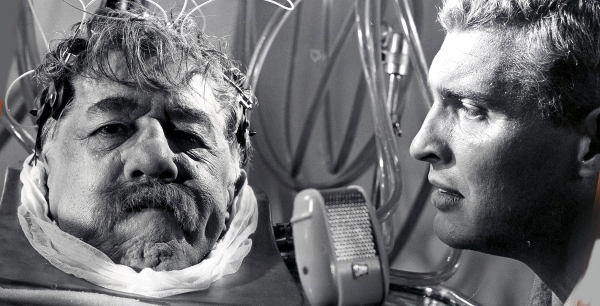 Have you tried to order this disc?  I have an important follow-up note to the CineSavant review on April 18 of a German DVD of The Head.  The disc I screened definitely had the choice of an English audio track and English subs for the German track. But an English reader ordered the disc, and the copy he has received has neither. If any U.S horror fans have ordered the German disc and are waiting for shipments to resume from overseas, please know that it’s not going to be English-language friendly.

The disc I screened to make the evaluation has been returned to its owner. It was a number of years old and appeared to be a store-bought copy, so I can’t account for the discrepancy. The review has been updated, please be forewarned.

Scream Factory has announced some attractive horror items for August, but not the hoped-for Roger Corman sci-fi picture Day the World Ended. Gary Teetzel reminds me that the earlier news of the disc was leaked, and a false release date given; Scream/Shout hasn’t officially announced the title. So the most we can do is hope that it’s still in the production hopper. Right now Scream’s Earth vs. The Spider is scheduled for June 23, while How to Make a Monster and War of the Colossal Beast are set for July 21.

Correspondent Jonathan Gluckman comes up with another strange movie-related music single — Lord Melody’s Creature from the Black Lagoon. I wonder how the 1954 movie would play with a calypso theme behind the titles?

I can’t resist — Sci-Fi Bulletin has run an interview with my lively friend and advisor Craig Reardon, whose opinions are always a good listen. Craig is especially good at evaluating makeups in old movies, from false noses to fake beards. I often don’t notice that an actor is wearing an appliance of some kind on part of his face. When Craig told me that Major Amos Dundee’s beard was only so-so, I didn’t take offense, honest.