The reliable Gary Teetzel forwards the info that Kino Lorber is promising two English Sci-fi films for Blu-ray this year, one a classic and the other — uh — not. Region A folks will finally be able to get their eyeballs massaged by Val Guest’s essential-viewing The Day the Earth Caught Fire ( ↑ ), a 1962 movie that gets global warming right. Not the cause of the warming part, but the vision of a world turned upside down by violent altered weather patterns. That, and Janet Munro in a wet towel.

The second movie is They Came from Beyond Space, a turkey of turkeys of which I’ve never choked through more than four or five minutes on old TV broadcasts. There must have been ‘Bowling for Dollars’ or Roller Skating on another channel. But I’ll check it out — what if it’s a classic that I overlooked?

‘Black Moon Studios’ has done something that certainly interests me — he’s examined a bunch of shots from the 1971 movie Omega Man and points out several dozen continuity flaws showing moving traffic and pedestrians, rotating signs and working traffic lights that pop up in the supposedly ‘dead world.’ He’s very proud of his digital fixes.

A question: does anybody know if the 1977 ‘Poo’ records cover version of the Omega Man main theme is online anywhere?  Susan Turner gave me a copy of a certain bootleg record album way back when. I was told it was produced by someone we know, and his name is (redacted).

The album contains a lot of UA horror and sci-fi music, plus the original Italo 45rpm sexy version of Diabolik sung by Maria Cristina Brancucci aka ‘Christy.’ “di stare più vicino a me!” … great stuff. I’ll go search for the album this coming weekend.

Stephen Bjork found it … YouTube has the ‘Disco Omega Man’ cover by Chuck Cirino. For me, its relation to the soundtrack tune is what Hugo Montenegro’s Good, Bad & Ugly radio hit is to Ennio Morricone’s original. 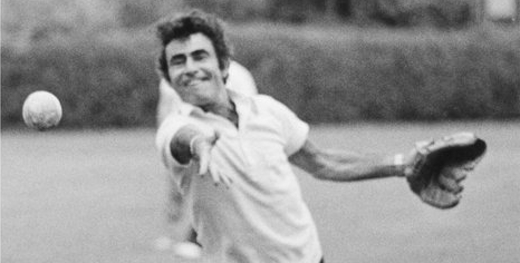 Another one from Gary Teetzel: AP has a news item by Ben Walker talking an old radio show making a comeback: Long-Lost Rod Serling Baseball Comedy on Deck. Serling, we are told, was an avid fan of the National Sport. The show is about baseball but also introduces a Cold War theme, with a Russian embassy worker who spends his afternoons watching the Dodgers at Ebbets Field. The article tells where Serling fans can hear a new performance, which I believe is coming tomorrow night, Wednesday.

Are we locked down or what? And, Why does this month look and feel like a Sci-Fi / Sontag Imagination of Disaster movie?

Los Angeles goes Quiet and so does The Rest of the World, two brief videos showing views of underpopulated public spaces, a potential Ghost World. Those aren’t the only two out there, as a whole stack of these videos are piling up online; maybe they’ll make people think a little. The weird thing is that we’re now seeing classic Sci-Fi ’empty world’ visions come to life on the TV news.

Don’t stop there, Glenn, name as many ’empty streets’ epics as you can: Seven Days to Noon, FIVE, Target Earth, The World The Flesh and The Devil, On The Beach, Last Woman On Earth, The Day the Earth Caught Fire, The Last Man On Earth ( ↑ ), The Omega Man, The Quiet Earth, and who cares about newer movies… Maybe we aren’t too badly shaken by these images because we’ve already seen ‘the coming attractions’ for them in old movies.

Here in Los Angeles there’s been an unexpected side benefit: standing outside on my porch, the air smells sweeter. Less auto traffic means better air, and less noise — I noticed tweeting birds more this morning and the horizon (the view to the Hollywood Sign) was clear all day. They say that in Paris under the Nazi occupation, the trees flowered more often and the air quality was better — nobody had gasoline for their cars. Of course, I’d rather have a our health security back. 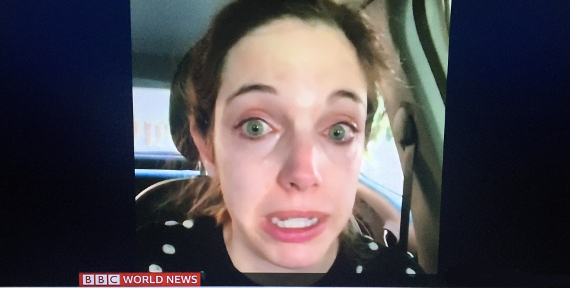 Not that I consider myself Mister Public Service, but…

For decent information about what’s happening in the world, I recommend to U.S. viewers the nightly BBC America Broadcast.  Sure, they’re slightly U.K.-centric, but they’re free of home-grown hysteria and don’t waste time on feel-good fluff. Most important, they actually care what’s happening elsewhere in the world and offer excellent coverage. Why are we so-called ‘exceptionals’ being asked to hunker down and self-isolate?  A couple of minutes looking at a young Spanish doctor tearfully begging people to stay home ( ↑ ) answers that question: it can and perhaps WILL happen here. Doctor Virginia Oro is not selling anything, she’s merely reflecting the disaster that right now is killing hundreds in Madrid every day.

That some of our leaders minimize the threat is not good … even if this thing gets under control sooner than later, a lot of people are going to suffer, some of them unnecessarily. Tim Lucas reports that the famed actress Lucia Bosé, aged 89, has succumbed to the virus. We just watched her famous Spanish film Death of a Cyclist on TCM a couple of nights ago.