Hello! I can imagine readers have plenty of important things to do today … but we’re still in a position to review discs here. Yesterday morning I had one Column item, and now I have too many.   I know I will miss at least one interesting disc announcement that will have to wait ’til Tuesday…

Film Movement has been giving us good Blu-rays of top British comedies; now they’ve put together a five-title compilation of top Brit pix about WW2, due on March 31. It’s just plain good stuff, with good extras. The set gives us remastered presentation of Cavalcanti’s Went the Day Well?, Eric Ambler’s wild what-if tale of a stealth invasion; Guy Hamilton’s The Colditz Story, a pre- Great Escape true story of an Allied POW break from a fortified castle; Michael Anderson’s The Dam Busters, about the spectacular ‘bouncing bomb’ raid on the Ruhr dams ( ↑ ), Leslie Norman’s Dunkirk, an earlier epic take on the mass evacuation, made the subject of a Brian Trenchard-Smith TFH Commentary, and J. Lee Thompson’s Ice Cold In Alex, a tense, under-seen movie about the North African campaign.

Film Movement has put together a corny but exiting YouTube promo for Their Finest Hour: 5 British WWII Classics, showing the quality of the restorations.

The Warner Archive Collection has announced something unusual for April: John Huston’s psychosexual potboiler Reflections in a Golden Eye, with Brando, Liz Taylor, Brian Keith and Robert Forster in an early role. This will be a curious item for Blu-ray, for the show is yet another of Huston’s ‘color experiment’ movies, the others being Moulin Rouge and Moby Dick. Warners is presenting the movie both in optimized ‘normal’ color, and also with the stylized ‘golden eye’ color treatment. I didn’t see the film new, but I was told that original Technicolor prints were not simply given an amber tone … they were described as genuinely golden in appearance, as if something really special had been done. Why?  You tell me.

Gary Teetzel has forwarded a mind-boggling 20-minute piece called What happens when an architect sees the movie Parasite?   What is shown must be the most exacting, detailed overkill miniature ever — magic hands seem to be at work. I’ve seen some pretty fancy model-makin’, but this is something else. The beautifully filmed and directed piece is apparently one of several. What Gary said is right, we wish it carried a modelmaker commentary. 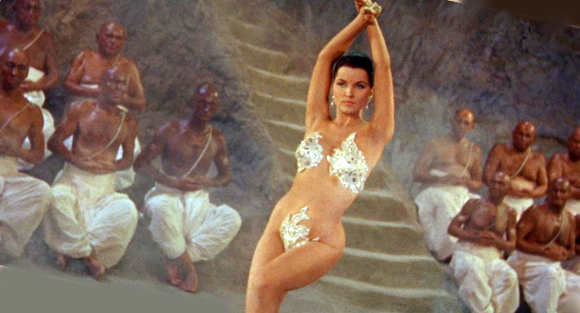 And today is a good day for more podcast / web radio from Dick Dinman: in this show he and Alan Rode discuss three separate Blu-ray releases. In Dick’s own words, they “marvel at the erotic exoticism of Robert Siodmak’s Cobra Woman, Ernest Schoedsack’s Doctor Cyclops (both now on Blu-ray from Kino Lorber) and Fritz Lang’s Indian Epic (just released in mind-blowingly lustrous fashion courtesy of Film Movement Classics).” The show has been given the compact, abbreviated title Dick Dinman & Alan K. Rode Salute The Exotic Fever Dream Fantasies of Siodmak, Lang & Shoedsack. That’s pretty raw stuff there. Personally speaking, I try to keep my exotic fever dream fantasies to myself.

The insanely busy and productive Alan Rode just saw a certain health crisis shut down his great Hollywood Noir City film festival, the last group activity I voluntarily attended: we’re all feeling the slowdown on the social and personal level.

More great news from Warner Home Video’s George Feltenstein, who confirms that the just-announced Blu-ray of the 1948 film Rachel and the Stranger will be a major restoration. The show stars Loretta Young, William Holden and Robert Mitchum; I learned from George a few years ago that Howard Hughes cut it by a full fourteen minutes, and that’s what we’ve been watching for generations. In George’s words, so I don’t get it wrong:

“Hi Glenn, IT IS the lost long version!  Complete and quite gorgeous. It is a combination of a 4K scan of the original nitrate camera negative (which was cut, and had the main titles re-filmed to remove writer Waldo Salt’s credit and contributions) and a 4K scan of an uncut British nitrate negative (which has the original full titles, and the fourteen minutes of missing footage).

I knew that the film had been cut severely, but I had never seen the original version, and I was unaware of Salt’s contribution beyond the screenwriting credit that had been removed — he also wrote the lyrics to the songs. We had never released a DVD because of the edits; there will be a DVD later down the line.

There is SO much great stuff on the way, I think you’ll be pleasantly surprised… and often.  All my best, George”

When George says ‘great stuff is on the way,’ he’s usually not kidding. Since his note, the Robert Wise ‘noir’ western Blood on the Moon and Richard Brooks’ Tennessee Williams adaptation Sweet Bird of Youth have been announced for Blu-ray as well. I’ve always liked Rachel and the Stranger — maybe Robert Mitchum does some more singing?   The other RKO pix I’m aware of that are in dire need of work to restore cuts made in reissue are Howard Hawks’ The Big Sky (140 minutes reduced to 122) and another title that few folk seem to know was ever cut, the fine film noir They Won’t Believe Me (95 minutes reduced to 80). It was directed by Irving Pichel and stars Robert Young, Susan Hayward, and (sigh) Jane Greer.