After that marathon of links last Saturday, I’ve run fairly dry today. But fellow conspirator-in-reviewing Charlie Largent zapped over a rather exciting link that promises no end of discovery, at least for those with time to dig through it. It’s called the Internet Archive VHS Vault, and it consists of a bunch of random digitizations of things that are presumably in the Public Domain. The shockeroo right on the first page is a rather good copy of the Beatles’ Let it Be, which I saw once when it was new and never again. Yup, there’s Yoko, all right, just a few seconds in. Her face prompted a few ‘boos’ at my screening, way back when — deserved or undeserved, she took the rap for breaking up the band. 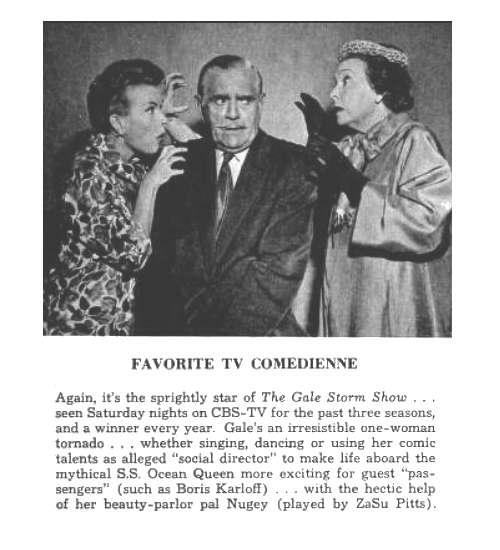 Other offerings on the site do look a little dicey — I mean, I see what looks like Disney content. But also an okay Invaders from Mars, in case you’re tired of holding your breath for a remastered Blu-ray.

← And leave it to Gary Teetzel to find more odd stuff in his web searches. He provides the answer to that question I know must be bugging everyone out there: What Frightens Boris Karloff?

Well, we now have photographic proof that what most terrifies old Boris is Gale Storm and Zasu Pitts!  I don’t recall ever seeing this photo before, either; it’s publicity foolishness to promote the 1950s TV comedy The Gale Storm Show. Judging by Zasu’s character name in the show, maybe Boris is worried that she’s going to rub her knuckles into his scalp. The text can be read by opening the graphic in a new window … it’s larger.

Thanks for reading, and thanks to correspondents writing in to tell me about the region coding on their German Explosive Media GmbH discs. Much appreciated!   Our three ‘Clicker’ friends with the ball-bearing eyes in the photo up top appreciate the help as well. They’re the stars of what is still the most perceptive Sci-fi movie about the robotic future — Glenn Erickson