Last time out I was discussing a special effect in West Side Story, and contradicting the explanation for how it was done as presented in a CBS Sunday Morning news piece. I said that the shot shown above, of Richard Beymer against the stylized New York background, is not a large scenic backdrop painted on a giant canvas, but a transparency of a much smaller painting, rear-projected behind the singing actor walking on a treadmill. Of course, after that statement was out half a day, I found myself digging out a Blu-ray of West Side to make sure I remembered the shot correctly. 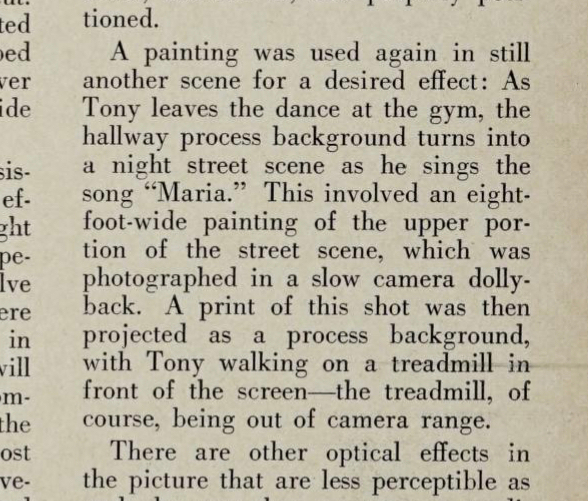 But Gary Teetzel again came to the rescue — how many times is this now?  He looked up a 1961 article in American Cinematographer that offers proof that I read the shot correctly. If you open the grab of the article on the right in a new window, it will be big enough to read. →

Or you can skate back 59 years and read the entire article.

I make my share of mistakes about movies and try to own up to my goofs as best I can. I remember asking Michael Arick once about a 70mm IB Technicolor print of something. He just patiently folded his hands on the desk in front of him and said, “Think about it, Glenn. There is no such thing as 70mm IB Technicolor.” Oops, live and learn.

I just don’t want to be one of those clowns in a Joe Dante movie that’s always sneering at ‘blue matte lines’ or saying, “A real general wouldn’t say that” … except that’s almost exactly what I do in the review today of the Glenn Ford — Debbie Reynolds comedy.

A few months back I happily joined in the chorus of web optimists reacting to the rumor that Susan Hart, the sole owner of a sizable number of 1950s American-International movies, was about to release them to home video. The obnoxious state of affairs is that they have been mostly withheld from circulation through the entire era of DVD and Blu-ray, to the frustration of fans everywhere. Most of the folks who saw the shows new back in 1956 – 1959 are older than I am, and as a group are beginning to mosey on up into that big cattle ranch in the sky.

Well, a few days ago author-interviewer Tom Weaver popped our collective balloon of hope for this one, posting on a web board:

Tom: “Here comes the wet blanket (me). Susan Hart called today to gossip about this and that, and I told her about this [web board] thread — the claim that she’s making a deal with Shout! and that her pictures would soon start appearing. I knew what she’d say before she said it:

I have collector friends with whom I just can’t discuss certain touchy subjects — I’ve given up asking why they don’t find a way to release films they control, that simply can’t be seen in good quality anywhere. It doesn’t matter to them that the fan base of the films is thinning out. Property is property and they just don’t see a way of making a profit from it, without losing total control, without ‘giving it away.’ And it’s their business, not mine, so there’s nothing I can do about it. Except whine once in a while.

I have the solution for President Trump’s slam at the Academy for awarding the Best Picture Oscar to a South Korean movie, instead of something All-American, wholesome and politically acceptable like Gone With the Wind. If he screens ‘Parasite’ at the White House, show him This Version.