My thanks to Toby Roan, who after reading an older article about a Special Effect Shot in Kronos, tracked down the magazine I remembered reading, and sent me a copy!   FantaScene Vol. 1 No. 2 was from Summer 1976, and was indeed put together by Robert and Dennis Skotak, using their interview material with Hollywood effects folk like Jack Rabin, Irving Block, etc.

The FantaScene cover art made me realize that my eye is critical of some visuals and not others. In Forbidden Planet’s Id Monster attack scene, the invisible creature is ‘painted’ by the disintegrator blast of the Space Force’s ray guns. But I just realized now, that what literally happens is that the red-fire flux illuminates a line drawing of the Id Monster. For a few seconds, he becomes The King of Cartoons, atomic edition. A remake of this scene would seem a perfect subject for CGI work, with the sizzling energy flowing over parts of the monster. Perhaps sections would be disintegrated, only to be instantly regenerated by the Krell energy projector.

I hope that Robert Skotak does follow through on his promises to publish more of his research … I enjoyed his book on Ib Melchior, and he’s accumulated a huge volume of original research on Eastern Bloc sci-fi pictures. His commentary on last year’s Blu-ray of This Island Earth, good as it was, only scratched the surface of his discoveries. 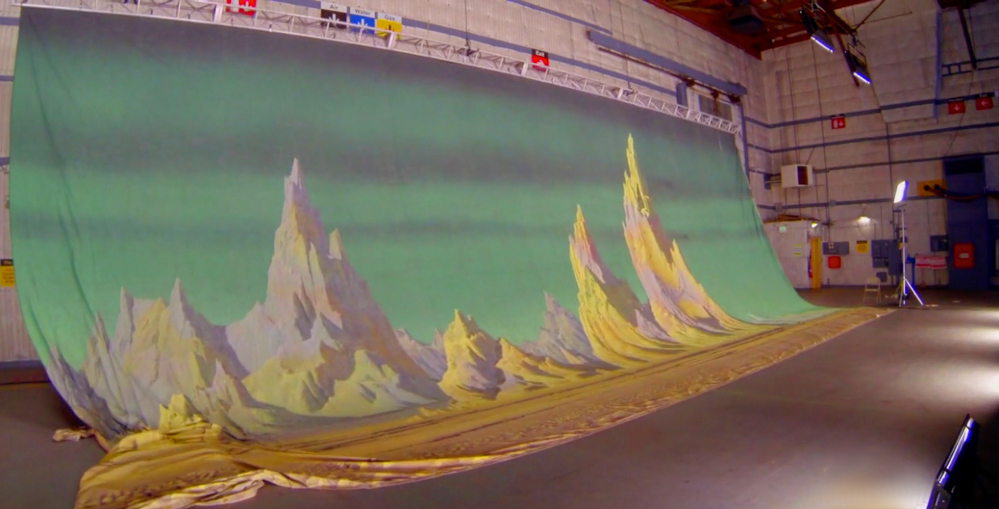 Gary Teetzel sent this link along a week or so ago, and I’ve just now found the time to check it out. Rescuing Scenic Backdrops from Hollywood’s Golden Age gives us a good look at those giant movie artworks that used to be everywhere in pictures — a while back, I even noted a severely wrinkled city backdrop in Roger Corman’s The Wasp Woman. Most seem to be from MGM, which maintained a dedicated building for the painting of huge CinemaScope backdrop canvases. That art shop had an elevator to raise and lower the canvas into a slot in the floor, so the artist didn’t have to work on a scaffold.

It’s pretty cool to see the landscape of Altair-4 unfurl. ( ↑ ) I’m pretty sure the giant cycloramic backdrop we see is just one of two or maybe three, that wrapped around the soundstage in a big circle, partly surrounding the spaceship.

The common mistake I’ve noticed with backdrops seen through doors and windows, is giving them a perfect exposure, that often says, ‘artificial studio work.’ When we take photos indoors, windows almost always burn out, at least a little. Overexposing what’s outside the window a little bit always makes the scene look more real.

Some of the scenic paintings in the news piece (like one I think from the June Allyson Little Women) are in static, locked-off shots, with the effect that they resemble matte paintings, much smaller artworks combined in the camera. I had always thought that the view of the Yellow Brick Road on the way out of Munchkinland was a matte painting, not a large backdrop, because the shot doesn’t move. Maybe these people know better, and it indeed was an artwork backdrop.

On the other hand, there’s the news piece’s questionable example of Richard Beymer against the stylized New York background from the original West Side Story. I’m fairly certain that what we see is not a scenic background, but a smaller matte painting, rear-projected behind the singing actor walking on a treadmill. I know that the background artwork of the city buildings was painted on a piece of masonite about eight feet wide, because the original hung over a sofa in Linwood Dunn’s reception room at his Film Effects of Hollywood building. Hoyt Yeatman and I visited that office in 1975, and immediately recognized it.