First, some photos of total arbitrary import, which is what we serve up best here at CineSavant. Digging around in some boxes of old Cinefantastiques and Video Watchdogs, I came up with this beauty with a Yuletide theme courtesy of Don Martin, from 1962. I thought it might lend a proper ersatz holiday flavor to the Column. Note the yellowed paper and even a coffee stain. No protective plastic envelopes for this irresponsible non-collector.

I was reading this particular issue when I was nine years old … how much of it did I fully understand?  Should I thank Mad magazine for honing my radar for commercial flim-flammery and ironic hypocrisy?  Or did it just make me a cynical little kid who only thought he was a non-conformist?

Then, for no good reason I snapped this picture of the corner of Melrose and Gower, a couple of blocks from my house — it’s the RKO globe, minus its tower but still standing proudly on what is now the corner of the Paramount Lot. I think Paramount, instead of tearing it down (they threaten to do so periodically) should restore the tower for nostalgia’s sake. BTW, when you’re looking at your new Blu-rays of Tarantino’s Once Upon a Time in Hollywood, the poster-boards seen in this photo are utilized to stand-in for the exterior of Columbia Pictures, which in 1969 was further up Gower Street, at Sunset.

I should be taking more pictures of the Ennis House — The House on Haunted Hill. I see it twice a week from my grocery store parking lot. When the weather gets free of its typical gray haze, the house often looks really dramatic. I’ll need to get a longer lens, though. 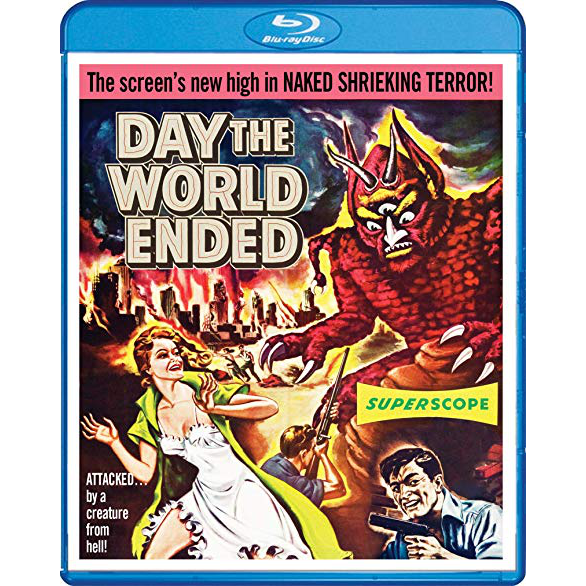 Spotted on Amazon by various clever individuals, including Gary Teetzel — an un-announced stealth pre-order for a Scream Factory Blu-ray of Roger Corman’s Day the World Ended, for March 10. I like that!   A good widescreen encoding of this fun film would be a real treat — I think we it’s the first movie in which Roger really gets his act together, in terms of full commercial credibility. Opening the package art image in a new window will give a full appreciation of American Relasing’s crude but catchy original poster artwork.

I found out who the audio commentator will be a month or two ago, but under threat of death I cannot divulge the name. Thus CineSavant remains forever scoop-challenged. Is that integrity, or what?

“The Blu-ray isn’t coming in March. It will be coming though. Amazon jumped the gun.”

Let’s talk about scary movies.  I wind up today’s column with a good steer back into Trailers from Hell territory … Joe Dante’s commentary-enhanced trailer for Charles Laughton’s The Night of the Hunter is a keeper. The trailer itself is pretty good, but Joe’s in especially fine form, describing his 1955 afternoon matinee packed with little kids scared out of their wits. As a movie director, Joe made me a bit nervous now and then the first time through Gremlins. I smile when I remind myself of how he made me jump with two or three terrific honest scares in The Howling.

It’s fun to hear Mr. Dante reminisce about his Night of the Hunter experience, even if only for a minute. That’s a good topic for a research paper: What Scares Joe Dante?

We all got scared at some movie or another when we were kids, even if we weren’t taken by surprise like he was at the Robert Mitchum movie. I had experiences like Joe too, white-knuckling all of Caltiki – The Immortal Monster and being pretty much paralyzed with fear all the way through The Birds. And for some reason I was scared of being buried alive while watching an obscure movie called Terrified, that I’ve never seen again. But those were EXCITING, FUN sensations for a fairly sheltered kid… Night of the Hunter was jolting as an adult — it think it would have traumatized me as a kid, even as a teenager.

And I’m still puzzled by a few pictures that, seen as an adult, made me FEEL like a scared kid again: The Texas Chain Saw Massacre, The Horror Chamber of Dr. Faustus and even Jaws. It’s all very personal, I guess — these were all seen in a theater under optimum conditions, in my twenties.
I hope somebody brings out The Seventh Victim in a remastered Blu — that’ll be a fun experience to write about, too.

Today’s kids have seen stuff far, far stronger than anything I was exposed to — and we see live-action actual killings on TV news every day. But they still have to be scared once in a while. Anybody have any stories to tell about being TERRORIZED at the Bijou?  We’ve all been little kids, cringing behind the sofa while the older sister watched something fairly harmless on TV. But what big screen experiences made you too scared to see the same movie again, ever?