A great announcement from Criterion for February!  Not content with gifting us with a December 10 deluxe disc of Wim Wenders’ Until the End of the World, the premiere Blu-ray company is giving Region A Karel Zeman fans the special edition they’ve begged for, for years. It’s a triple bill of Czech fantasy in the inimitable Zeman style: Cesta do Praveku aka Journey to the Beginning of Time, Vynález Zkázy aka Invention of Destruction or The Fabulous World of Jules Verne, and Baron Prásil aka The Fabulous Baron Munchausen. They consist of one marvelous prehistoric romp, one Jules Verne extravaganza, and one of the best tellings of the Munchausen story. I’ve bought one of these in Region B, but now they’ll be available for everybody. Here’s a great recent Czech trailer for Vynález Zkázy.

And, on a personal plane, the time has come to announce a new Blu-ray release of this columnist’s favorite film, Sam Peckinpah’s Major Dundee. It must be my favorite movie by default, as it’s been on my mind for over fifty years. This new disc is coming from Explosive Media of Germany. I got involved with its production early enough to contribute some key extras, and to influence the version offered. It’s due on December 12, in a two-disc ‘mediabook’ presentation. The film and some extras will be on the first disc, and the second disc will carry the bulk of the video extras. 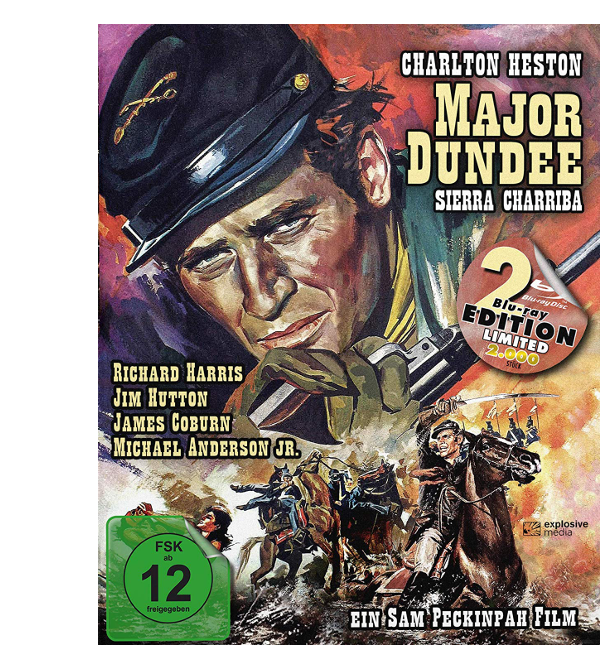 This announcement can’t be a review, because all I’ve seen of the new disc so far is a .pdf of its 48-page insert booklet, illustrated with full color and B&W photos from my collection (optimized by Craig Reardon) and from the extensive archives of German filmmaker Mike Siegel. Although the disc is meant primarily for the German market, I am told that its contents will be mostly English- friendly. Producer Ulrich Bruckner assures me that all the video extras will be fully subtitled in English, including my new full-length commentary, the 2005 archival commentary by the assembled Peckinpah authors (Paul Seydor, Garner Simmons, David Weddle and the late Nick Redman), the new commentary I’ve added to Sony’s outtakes reel, and a new feature-length documentary by Mike Siegel. That’s a lot of subtitling. My two booklet essays will only be in translated German, but I’ll gladly forward my original English text to purchasers of the disc.

Mike Siegel’s documentary Passion & Poetry is not an excerpt from his 2009 feature docu of the same title, but a more extensive piece just on Dundee, with much longer interviews. He finished editing it last Spring, I believe; it’s great that it could be included.

My new commentary was submitted in August. I’m hoping that it’s a worthy listen for fans that would like a better understanding of exactly the story Sam Peckinpah wanted to tell, before he was fired and barred from the studio. I tell a bit of the production story but spend much of the show’s 214 minutes describing and explaining the many scenes that were cut and destroyed when producer Jerry Bresler took control of Dundee in the editing room. I re-connect story and thematic threads that were lost. It’s all taken from the original shooting screenplay, and Peckinpah’s papers at the Academy library. Also included will be excerpts of a 2008 interview between associate Dick Dinman and one of the film’s stars, Michael Anderson Jr..

I do add some opinionizing, discussing Peckinpah’s interesting political agenda — the business referred to by critic Andrew Sarris when he slammed the director as ‘too intellectual to tell a story.’

I likely won’t see the final disc until much nearer its release date. That means I can’t commit myself to the final specs yet or vouch for the image quality. My understanding at this time is that the two-disc set will be Region-Free. The version will be the full-length preview / international version cut, viewable with either the original Daniele Amphitheatrof music score, or the 2005 revised Christopher Calliendo music score. This will be the first Blu-ray release for the full-length movie with its original 1965 audio. An earlier Twilight Time Blu-ray presented the original soundtrack only on the shorter, obsolete ‘theatrical version,’ which was really a truncated American cut.

Sony restored the longer cut in 2005. It’s the version with which Dundee was previewed, and the way it played in several foreign territories, which included (as Darren Gross long ago confirmed) France, Finland, Italy and West Germany. In Germany it was originally released under the title Sierra Charriba, which is the easiest way to find it at Amazon.de .

Explosive Media found no surviving German track for the long version. Disc producer Ulrich Brucker told me earlier that for his German language track, the movie will default to English during the preview-cut scenes that were restored in 2005. That’s what Explosive memorably did for its multi-language must-see-to-believe release of Sergio Corbucci’s The Big Gundown back in 2012.

I hope this description turns out to be accurate, but I can’t make guarantees until I check out the disc for myself and do a review — I hope the quality is good and that it’s the dream Major Dundee I’m hoping for.