It’s book review time again at CineSavant,
and this go-round Charlie Largent
is the one doing the reviewing,
of a favorite author: 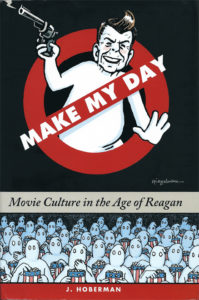 Veteran film critic J. Hoberman reviews veteran entertainer Ronald Reagan’s final performance in Make My Day: Movie Culture in the Age of Reagan. Hoberman, late of the Village Voice, describes a blackly comic thriller in which Hollywood melds with Washington’s political machinery to manufacture the perfect Dream Factory candidate – a symbiotic horror show more frightening than anything in The Fly (Cronenberg’s film was one of the more gruesome critiques of Reagan’s America circa 1986).

Hoberman’s longtime investment in socio-political currents gives his writing a welcome jolt – hindsight is golden but as the man who wrote Vulgar Modernism, Hoberman’s strength has always been to frame a film in the here and now – were his prose not so elegant, many of his reviews wouldn’t be out of place above the fold of the morning paper. And as Make My Day makes clear, Reagan’s daily intrigues might have been more easily deciphered if planted next to the movie ads in the theater section.

As the first thoroughly cinematic president, it’s impossible to read about Reagan’s exploits without considering the reality show president currently defenestrating democracy. In The Entertainer: Trump l’oeil, Hoberman writes about the boob tube blowhard who “thrived in a far shoddier information eco-system that was already polluted with lies and where his roustabout antics were taken for truth”.

45’s daily grotesqueries boggle the mind but Hoberman’s appraisal of 40 is similarly devastating – and occasionally so fiery that Sue Coe’s portraits of Reagan for the late Raw Magazine seem too kind in retrospect (Raw editor Art Spiegelman did the Reagan/Ghostbuster cover art for Make My Day).

The third part of a trilogy that began with The Dream Life and An Army of Phantoms, Make My Day lays out the unofficial logline for Reagan’s Movie Presidency – and it even comes with a preview of coming attractions as Hoberman charts the “germination” of the Reagan era with notes about 70s’ cinema including Jaws, Apocalypse Now and, of course, Star Wars. 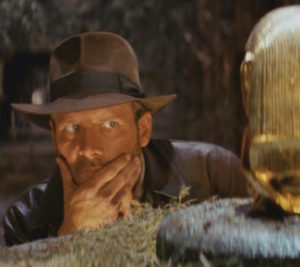 Whiplashing between politics and movie releases, Hoberman relates Jimmy Carter’s ascension to 1976’s All The President’s Men: “the movie is also a counter-culture victory – the Sundance Kid and The Graduate take down Nixon”. But it’s not until Reagan is firmly propped up in the White House that the first official “Reagan movie” appears – Raiders of the Lost Ark – in which “an American hero… bestrode the Third World like a colossus”.

Naturally Spielberg, with his supernatural, not to mention, populist success, becomes an ongoing character in the book, “a brand name bard who sang the song of American normalcy” but the real supporting actor (in more ways than one) of Make My Day, is not Clint Eastwood (who appears more desperate than macho) but Sylvester Stallone whose can-do spirit in 1977’s Rocky curdles in 1982’s First Blood – followed by Rambo and its rabble-rousing sequels. 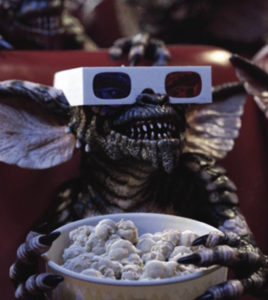 The mid-eighties saw fissures appear in the Reagan bubble – Joe Dante’s Gremlins was both a comedy, a horror film and a send up of the cornfed films of the president’s own movie career (Gremlins was shot on Universal’s Colonial Street – the same location used for Reagan’s Bedtime for Bonzo.)

David Lynch’s dreamy Blue Velvet materialized late in the decade, flipping the sunny-side up neighborhoods of Father Knows Best into a noir version of Joyce’s Nighttown. Hoberman notes critic Howard Hampton’s revelation that, while reading Pauline Kael’s review of Blue Velvet, Hampton realized she could have been describing King’s Row (Reagan’s personal favorite of his own films) – in Hampton’s words – “the typical nostalgic view of American small town life turned inside out: instead of sweetness and health, we get fear, sanctimoniousness, sadism and insanity.”

The Reagan scandals – Iran-Contra, the EPA boondoggle, the savings and loan crisis, begin to fly as fast as the movie premieres and at times Make My Day feels like an overdose of factoids (or as ancient ballyhoo would have it, “stories ripped from today’s headlines”) but the overall effect is bracing, clarifying and casts a long shadow – the president who embraced the “dream life” of movies set the stage for the man who sprang from the get-rich-quick swamp of TV game shows – the line that best sums up our current woe is not from a movie but The Larry Sanders Show – “He’s hit bottom and broke through to another bottom I know nothing about.”

Hoberman is presenting a series of double features at the Lincoln Center between August 23 and September 3 – each evening is a double feature drawn from Make My Day including Blow Out, Gremlins, Salvador, Robocop, Pee Wee’s Big Adventure and First Blood – details here. — Charlie Largent