For its 1000’th spine number, Criterion has announced an enormous, budget busting boxed set of, whoo’da-guessed it, Godzilla Pictures from the Showa Era, roughly the ’50s through part of the ’70s. I remember looking over a proposed Criterion laserdisc set of these films back around 1996 or so, that fell through almost immediately after being promoted through some expensive Criterion handouts … and it seemingly has taken 20-plus years for Toho to strike a deal. I pretty much check out of having interest in the series somewhere in the late ’60s. Taking my terrific little brother to Destroy All Monsters I realized that the thrill just wasn’t there, as it had been for me when staring up at a giant-screen monster battle in 1959’s Gigantis, The Fire Monster. THAT was a first-run delight for a seven year-old. The big treat this time around, if announcements are correct, will be a quality encoding of the Japanese version of King Kong vs. Godzilla, which so far has only been released here in its Universal dumbed-down cutdown version. Criterion has a hit-and-miss record when it comes to pop pulp lowbrow/high style genre exotica, so we’ll be happy if they continue in the vein of their excellent 2011 Godzilla/Godzilla King of the Monsters! disc set — I wish they could publish and sell a poster of that release’s cover art by Bill Sienkiewicz!  I asked Gary about what he liked in Godzilla art, and he directed me to the page of artist Bob Eggleton to check out some creative ‘Big G’ paintings. 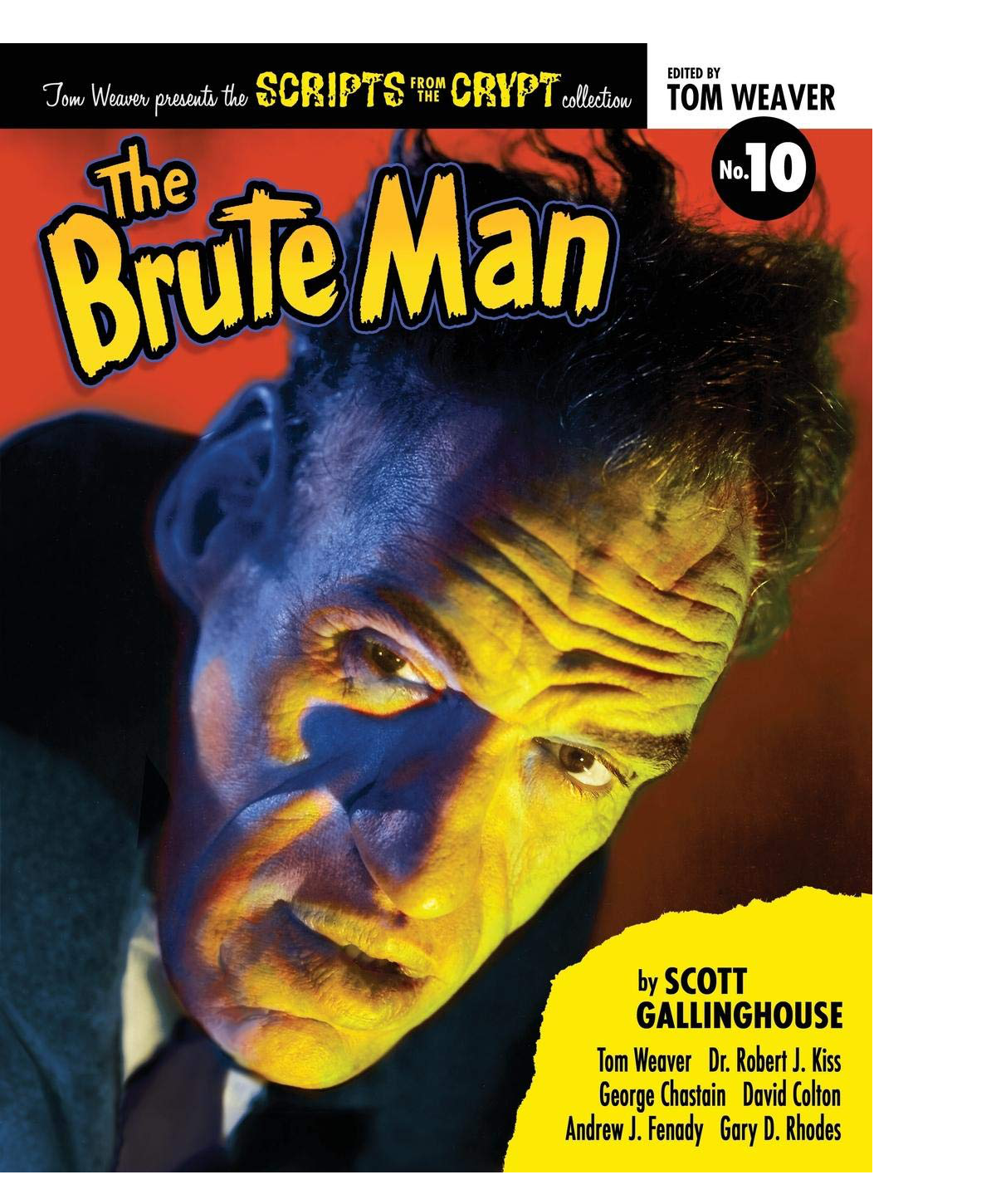 And I have a brief Book Review to offer here. It’s the tenth tome in the ‘Scripts from the Crypt’ series, this one entitled The Brute Man. In comparison to some other titles in the series, the final film of horror star Rondo Hatton isn’t much to shout about, but this SFTC entry is one of the most satisfying I’ve read so far. The series takes something of a scrapbook approach built around the film’s screenplay and a substantive essay or two, with editor Tom Weaver holding it all together with sidebar articles and incidental items.

I saw The Brute Man a long time ago and was not impressed — the mostly lifeless movie can’t hold a candle to Rondo’s best show (IMHO) House of Horrors. But the unique story of the ‘horror actor who didn’t need makeup’ makes for good reading. Scott Gallinghouse contributes the longest segment, a thorough and rumor-busting essay about Rondo’s life, from his sports triumphs to his exploits in France during WW1, through his career as a mainstream journalist while dabbling in, and finally committing to, movie work.

Rondo’s illness eventually ended his life; the acromegaly not only distorted his formerly handsome features, but also damaged his inner tissues, weakening his heart. Gallinghouse’s detailed account succeeds in showing us what an intelligent and thoughtful ‘good guy’ Rondo was, through incidents of generosity and fan interaction that show class and humility. The symptoms were becoming acute just as Universal had decided to feature Rondo as an unique horror character, The Creeper. But by the time of The Brute Man his ability to remember dialogue lines became impaired. 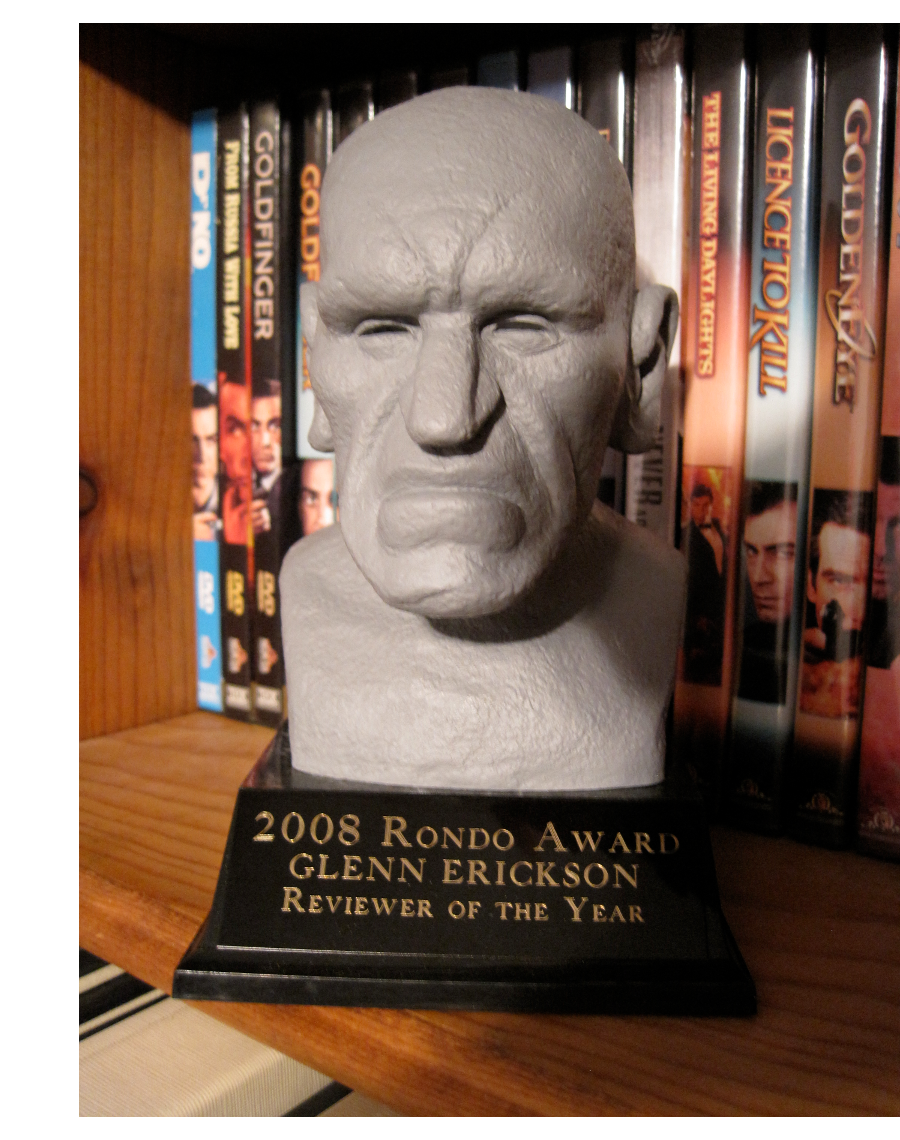 That’s followed by Tom Weaver’s production history, and an as-finished Continuity Script for The Brute Man. Dr. Robert J. Kiss’s ultra-detailed distribution article again furnishes a picture of show-biz practicalities in the year that that Hollywood suddenly began to lose its audience.

There’s more than enough respect reserved for Rondo, even though this entry retains its sense of humor. A special feature article I really enjoyed is a thirteen page, thoroughly annotated and illustrated glossary of actors Hollywood and international that made their living because of their ‘unusual’ looks. The rogue’s gallery begins with acromegalians like Rondo Hatton, but moves on to include giants, wrestlers, tall guys, boxers, ‘awesome brutes,’ just-plain ugly mugs — plus some actors that played acromegaly victims in makeup. It’s like a Hollywood Actors Directory for big brute guys, and it’s fascinating. At some point or another each must have hummed the lyrics of ‘Hooray for Hollywood:’ “I’ll try my luck / I could be Donald Duck!”