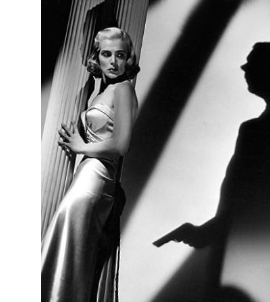 Here in my hometown, the 20th Hollywood Noir City festival is slated for a full week, April 13 through 22. at the American Cinematheque. They appear to be concentrating on titles not available on disc, which makes some of these very attractive to yours truly:

Down Three Dark Streets, Dragnet, The Turning Point, The Scarlet Hour, Jealousy, M (1951), The Big Night and Night Has a Thousand Eyes.

The ever-searching CineSavant correspondent and advisor Gary Teetzel reports on a radio show he heard:

“I happened to catch part of a 1944 episode of the radio show Suspense titled The Dark Tower. Orson Welles plays a vain, hammy actor. At one point, commenting on a play for which he is preparing, he quotes one of his favorite lines from the play’s Act II, his response when another character asks him why he doesn’t stop drinking:

“What?! Would you have me subsist entirely on food, and reach the gargantuan proportions of an Orson Welles?” That ought to needle the boy wonder, eh Ben?”

The show is adapted from a 1933 play by George S. Kaufman and Alexander Woolcott. 1933 is too early for a Welles joke, so perhaps the line originally referenced someone else, and was updated. Orson may have been the one to suggest making himself the butt of the joke; he enjoyed poking fun at himself and his ‘boy genius’ reputation on radio shows.

Later in the show, there is another inside joke of sorts when Orson is rattling off the names of actresses who could take the lead in the play, He ends with Mercury veteran Agnes Moorehead.

You can listen to the full episode here. — Gary

My only question is, did Orson Welles really have ‘gargantuan proportions’ in 1944? I didn’t know he was gaining weight that early on. Thanks for reading! — Glenn Erickson