Trying to find some information about the best way for Canadians to order U.S. discs, I got a number of helpful suggestions from north-of-the-parallel correspondents. The problem one reader had was mainly with the Warner Archive Collection — Amazon.ca simply doesn’t list all of them, or are understocked. He encountered downside issues ordering from Amazon.com U.S., with an unfavorable exchange rate, etc..

Several responses came back right away — unfortunately I didn’t mention Warner Archive discs very prominently, so I only got limited help on that one. The helpful readers that wrote in are Joel McCaull, Verel McElravy, Bryan Barrow, John Prins and Nigel Jahrles. Actually, some of what they said contradicted the experience of my concerned reader:

“Unobstructed View became Criterion’s Canadian distributor a few years ago and now we can get our own version of the Barnes & Noble sales. They also distribute Kino, Arrow and many more. I highly recommend them.”

“I’ve ordered 20+ times in 2021 from Amazon.com U.S. and have found the exchange rate to be fair & the delivery service very fine, if sometimes slow; Amazon’s tracking feature often even works for Canada which is a plus. Another possibility is ordering directly from Kino Lorber which I do quite a bit; they’ve got a lot of good movies at fair prices & right now they’re having a sale.”

“The source I use is Unobstructed View out of Toronto. Their prices are better than Amazon.ca, and they are official distributors for Criterion, Kino Lorber, Arrow, and many others. They have frequent sales, including sales that mirror the official Criterion sales. They even have free shipping for larger orders. Titles I can’t find at Unobstructed View, usually Warner Archive titles, I usually order from the TCM site.”

“My number one tip: open up the sidebar in amazon.ca marked ‘new from,’ and if importcds shows as a third-party vendor, use them. No more than 2 wks. delivery time, and only a $3.49 CAD shipping charge.”

“Unobstructed View are the official Canadian distributor for most of the boutique labels. They also run sales to match the ones happening elsewhere for Criterion & Arrow, which means you can expect at least 4 sales events for each label per year.”

I’m assuming that these are all legit responses, and not from ringers . . . although I’d never know the difference. I guess this ends up looking like an ad for Unobstructed View and “importcds” . . . which I looked at and definitely saw Warner Archive discs for sale. That said, I’ve never personally checked out these sites and cannot personally vouch for them. So chalk this up as more iffy journalistic ‘recommendations’ from CineSavant . . . I hope my reader solves his problem.

Now to catch up on some quality, undemanding reading: correspondent Lino Benvenuto passed on a link to The Chiseler, a site with a selection of good articles about older movies. The Chiseler prides itself for writing about, quote: Forgotten Authors, Neglected Stars, and Lost Languages Rediscovered.

The present page has articles I ought to read to broaden my mind. I gravitated toward some brief, thoughtful pieces on Spanish filmmaker Segundo de Chomón by David Cairns, silent movie actress Florence Turner by Imogen Sara Smith and some Depression-era William Wellman movies, by Daniel Riccuito.

I knew it would be fixed, somewhere: 11 years ago at ‘DVD Savant’ we reviewed the Warner Archive Collection DVD of
Operation Daybreak, and were fairly certain that an entire subtitle track had been left off the disc. Operation Daybreak is an excellent account of the assassination of ‘The Hangman’ Reinhard Heydrich, the Reichsprotektor of Prague and the architect of the Holocaust’s Final Solution. It stars Timothy Bottoms, and as Heydrich, the dependably villainous Anton Diffring. 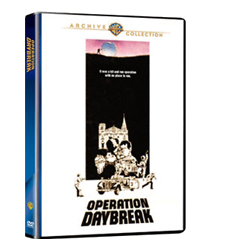 In the movie, the Czech dialogue is spoken in English, and the German dialogue in subtitled German … but the subtitles were left off the WAC’s 2010 DVD. A couple days back Turner Classic Movies cablecast Operation Daybreak, with subs intact. I now know what’s being spoken in scores of important scenes.

One plus for the Made-On-Demand production plan is that there is no huge standing inventory of product for every title made. I’ve seen the WAC quietly correct understandable ‘mistakes,’ even going so far as to restore a censored shot to the horror film The Cyclops.

So only one question remains: was this flaw ever corrected in the Warner Archive DVD?  I never followed up. Has any CineSavant reader purchased a newer WAC copy of Operation Daybreak?  Does it carry restored English subtitles for the German dialogue?

As a postscript, TCM also showed a restored, wonderfully pristine print of Francis Coppola’s You’re a Big Boy Now last Saturday Night … a real treat. Catch it if you can next time it’s up.